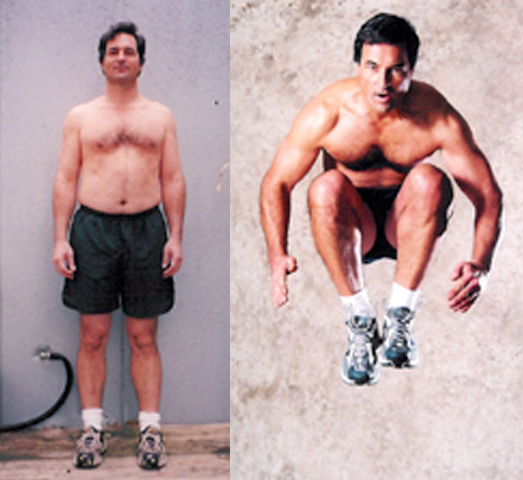 “Physique’ wasn’t among my objectives when I signed up with Mikki; I simply wanted to be able to sit, walk, sleep, and live a normal life. Mikki was my last-ditch attempt to avoid major surgery for a degenerative spinal condition by which I was being progressively debilitated. I couldn’t squat-lift a broomstick without twisting my hips, and the doctors had warned me to avoid axial loading of any kind; how could I anticipate that twenty months later I would be powering through squat sets with ‘two plates’ (225 lbs), safely, symmetrically, and begging for more?

The condition from which I was suffering is called spondylolysthesis, where the ‘wings’ of one of the lumbar vertebrae separate from the core structure, resulting in forward slippage of the broken vertebra over the one below it. In my case, the original fracture (to the lowermost vertebra) occurred during a childhood ‘jumping incident’ but the condition didn’t become debilitating until my mid-thirties, by which time the slippage had progressed to the point of looking bizarre in x-rays. I tried every therapy I could find-yoga, acupuncture, osteopathy, chiropractic, rolfing, etc.-but continued to lose ground. By about age forty I was forced to answer ‘yes’ to all of the questions on the checklist for candidates for radical low back surgery: ‘pain is intrusive and constant, work is difficult, social life or hobbies are impossible, family life is compromised and the level of function is in every way sub-optimal.’ And they forgot to mention sleep, play, travel, and sports.

Fortunately I had a surgeon who was more interested in my well-being than in fattening his own wallet. He was very honest about the potential downsides of surgery, pointing out that the surgical ‘cure’ is almost as bad as and often much worse than, the disease itself (the surgery involves bone grafts from the thighs or other parts of the body, the insertion of complicated and failure-prone hardware, incisions from the posterior and possibly the anterior sides of the spine, and a prolonged recovery period of severely restricted mobility-and even the best-case odds are horrific: failure of fusion occurs in something like sixty percent of adults). And he was frank about his own reluctance, in spite of his sympathy for my growing discomfort, to undertake such a drastic, dangerous, and irrevocable procedure.

This was when my luck finally changed. At about the time when I was ready to grab a scalpel and fix it myself, the surgeon somehow got wind of Mikki’s work. How he became convinced that she might be able to help me I still don’t know, but I remember how strenuously he insisted, as he handed me Mikki’s letter of introduction from his desk drawer, that this was my last best chance for a normal existence. I can’t say I shared his conviction at that moment. For one thing, I felt that I had already tried every non-surgical remedy under the sun, including a lot of trunk-strengthening exercises. For another thing, I had an old-fashioned bias against personal trainers in general, seeing them as expensive affectations of the idle rich, better suited to stroking the ego than building the body. So I didn’t call Mikki immediately, as I had promised the surgeon I would, but eventually, for lack of anything better to do, I decided to go down to the gym where she practiced and spy on her in action.

Well, seeing her at work with a client was all the convincing I needed: I waited until the end of the session and then (suddenly afraid that her schedule would already be full) I cornered her in the parking lot to sign me up. What I had observed were the qualities that I knew would make her exceptional as a trainer: total focus on the client for sixty minutes of every hour; respectful and empathetic attention to individual needs and circumstances; patient insistence on proper and symmetrical technique (teaching that muscle failure is fine; cheating or ‘Englishing’ an exercise is not, for example); efficient use of time (for example alternating between opposing muscle groups to accomplish rest and exertion simultaneously, and staying ahead of the game by setting up sequential stations during rest intervals); modulation of intensity to maximize returns; absolute mastery, and the ability to execute picture-perfect demonstrations, of every technique; all topped off by the almost super-human body that she developed during the competitive phase of her career providing constant inspiration. I still didn’t know if she would be able to put Humpty together again, but at that point I had to agree with the surgeon that she was my last best hope.

Mikki designed a program of step-ups, lunges, semi-straight-leg dead lifts, good mornings, and about forty different abdominal and back-strengthening exercises to retrain my nervous system and gradually equalize the muscles around the spine. This was a slow, sometimes painful, and often counter-intuitive process, undoing at least twenty years of habituated behavior, and it was several weeks before I could do even a single unloaded squat that would meet Mikki’s specifications. Luckily, though, I had learned early on to leave the thinking to her, and, sure enough, the day came when we could finally begin to add weight. Today I am safely, comfortably, and symmetrically squat-lifting 225 pounds, with corresponding gains in my chest and back, and still progressing steadily. This is the definition of physical transformation. And it is a transformation that I have accomplished in three hours or less per week.

This is why a good personal trainer is such a great investment: all you have to do is show up, and you get sixty minutes of perfectly tailored exercises, at exactly the right intensity for maximum gain, for every hour you spend at the gym. Mikki observes, counts, spots, and coaches each and every rep; she mixes things up for maximum effectiveness and interest; she adds spice with ‘vanity’ exercises that create muscular definition you will notice the next time you look in a mirror, she throws in low-pressure tips like how to lose fat by eating more, and she motivates and inspires you by her personal example of athletic accomplishment to move far beyond your previous limits. Work that would otherwise be an impossibly tedious, exhausting, and overwhelming proposition becomes the energizing highlight of your day under Mikki’ s coaching, and the transformation that you experience in the gym will carry over to every aspect of your life. Go for it!”